In this brief guide, we'll:

Sandcastle is a friendly WebXR framework for creating spatial-first, multi-user WebXR apps and XR Packages. It also features a build pipeline designed explicitly for XR Package creation and as such, is probably the easiest way to get started creating XR Packages.

Sandcastle is built on top of ThreeJS, one of the most popular libraries for creating WebXR & 3D on the web, and most of its API simply leverages ThreeJS's API. You're highly encouraged to explore ThreeJS's docs and examples to get a better idea of how it works.

The Sandcastle Wiki will be another useful resource at this point; it contains much information about Sandcastle's networking, physics and custom features that it offers on top of ThreeJS.

For this tutorial, you'll need:

First, we'll quickstart a boilerplate Sandcastle app. In a folder of your choice, type:

This command will create a new folder bearing your app's name, then it will enter the folder and install all the dependencies needed for a fresh Sandcastle project. Finally, it will launch the project so at the end you should see Sandcastle's default scene auto-launch in a browser - looking something like this:

A couple of notes about this process:

The Lay of the Land

The folder hierarchy in our new project folder should look something like this: 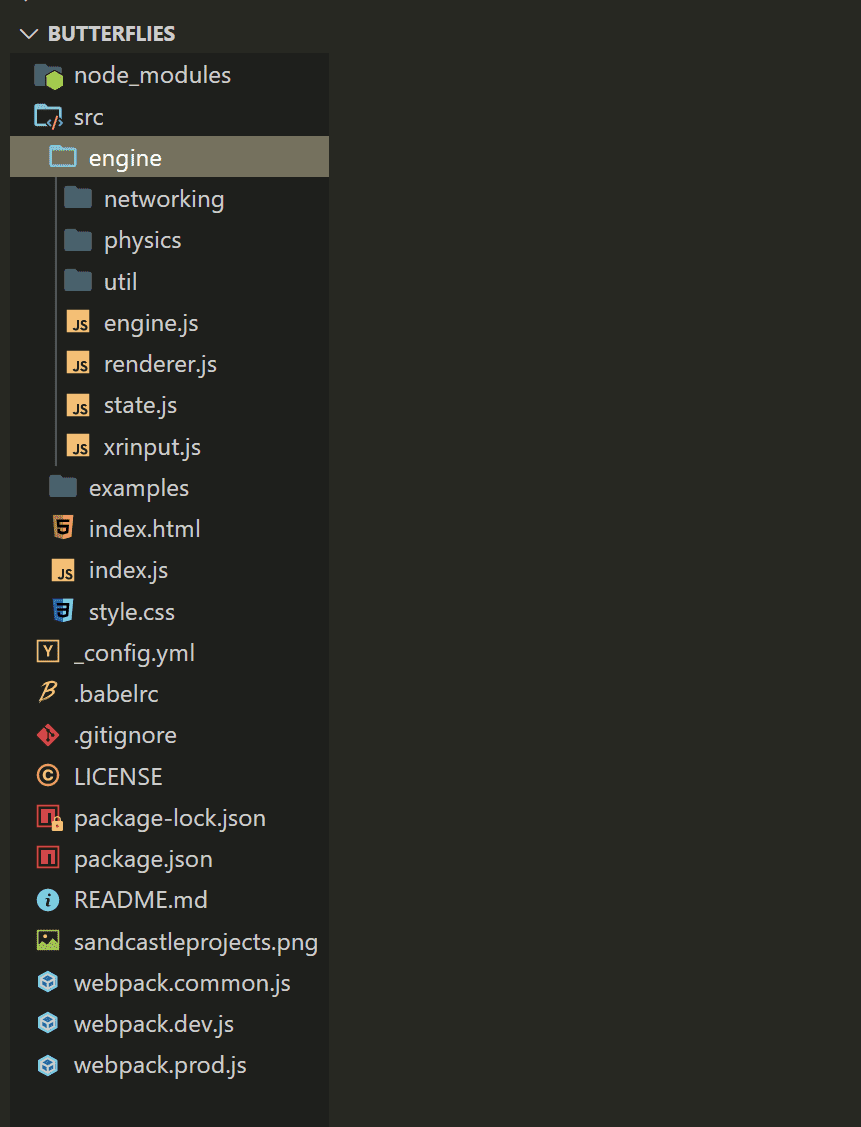 There's a lot going on here, so let's focus on what's important:

If you open defaultscene.js, you'll see the ThreeJS code that is responsible for what you see in your browser. We'll be iterating on this file.

Let's tweak defaultscene.js a bit, just to make sure we understand how to add our own code. (This will be a minor modification; of course, you're welcome to change the scene as you see fit or create a completely new one).

Let's add a rotating cube! in your import list, starting in line 3, add BoxBufferGeometry, MeshNormalMaterial so that we import these primitives from ThreeJS.

Then right before export { scene } at the end, add:

Once you save, Sandcastle should autoreload and you should see something like:

Note: one of Sandcastle's features is a game-engine-like editor camera. While in your browser, you can Right Click + WASD to move around the scene and drag to change where your editor camera is pointed. (Like game engine cameras, has no effect on the WebXR cameras once you go into VR, but is a useful feature for development purposes.)

Let's animate our cube. As you may know, a ThreeJS scene is animated by hooking into the browser's built-in RequestAnimationFrame() function, which runs many times a second. Sandcastle offers a convenient feature - any method named Update(), on any object that's in the scene, will run every frame. Let's add some rotation to the cube:

And see it in action.

Now will be a good time to hop into Metachromium, our true destination, and see this cube as a multi app in SteamVR! Open http://localhost:1234 in Metachromium and click "ENTER VR": 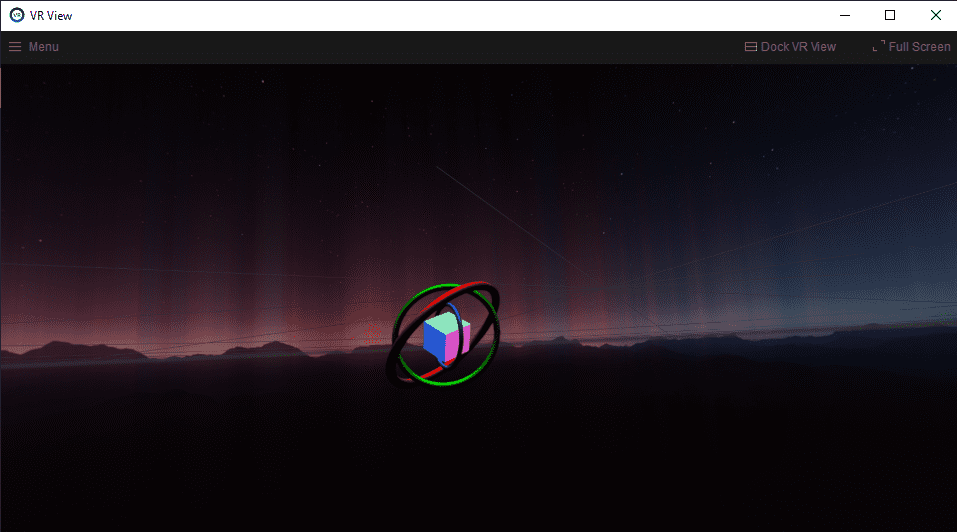 As you can see, we can see our rotating cube inside the rings, existing inside SteamVR! While it is not yet an XR Package, Metachromium is capable of presenting WebXR content as an overlay which is why we can see SteamVR in the background. Without XR Packages, we are limited to a single WebXR-scene-as-overlay at a time, but this is more than suitable for development purposes.

Finally, let's add a touch of input! WebXR inputs come in two flavors: events (pertaining to trigger and squeeze presses) and polling based inputs (related to the gamepad API: buttrons and joysticks). We're not going to focus on WebXR input in this tutorial, but feel free to check out the WebXR Input Explainer and Sandcastle Wiki) for more information.

To easily access our WebXR input, Sandcastle ships with an XRInput module. Let's import it:

As the Sandcastle Wiki teaches us, we can subscribe to input events fro XRInput. Let's slightly offset the cube's position every time trigger is pressed (a selectstart in WebXR spec parlance). Add the following code after adding the cube to the scene:

Press the trigger and watch the cube cheerfully teleport to a random location:

Here's all of our tweaked defaultScene.js, for your reference:

Finally, let's turn this app into an XR Package so that we can load it alongside other multi apps as we traverse the immersive web!

Sandcastle has a handy script that turns WebXR apps into XR Pacakges. From the command line in your project folder, run:

You'll be guided through an interactive menu - choose the default option for any you're not sure about: 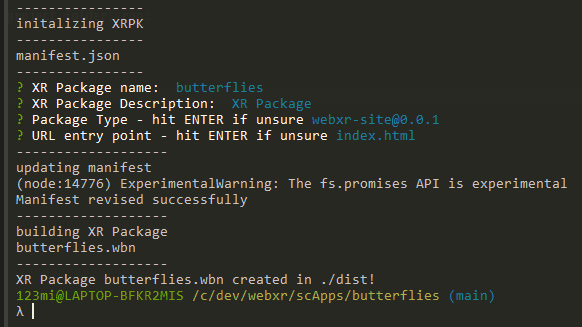 As the script mentions, your xrpk now awaits you in the ./dist folder; note that the XR Package is a single file, and its suffix is .wbn.

Load it up in your preferred XR Package environment (we recommend The Pluto App Launcher - note that you'll currently have to serve your file remotely using the Custom-From URL option), and see it in action alongside other multi apps!

Thanks to the magic of the Pluto App Launcher and Sidecar, if you now start or join a Pluto conversation, other participants (also running the App Launcher) will be able to see and interact with your app!

That just about wraps up this Sandcastle tutorial; you are now able to jumpstart a WebXR app, iterate on it, turn it into an XR Package and load it in the Pluto App Launcher.

What multi app will you build next?

Feel free to offer suggestions or raise issues to anything you see in this guide on GitHub!