Pluto, in collaboration with LunarG and the OpenXR Working Group, is working on an OpenXR Overlay Extension that will be compatible with Unreal Engine 4's OpenXR plugin, enabling straightforward Multi App creation doesn't require knowledge of coding or any advanced high-skill domain. While the effort is still underway and these are early days, if you want to get started building Unreal Engine 4 overlay apps, you can give it a try right now.

The UE4 Overlay Extension isn't stable yet and should be considered highly-bleeding-edge. Use the tutorial for educational purposes but do not use anything in production quite yet.

Depending on the errors you run into and how strong your machine is, this process can take anywhere between several hours to several days.

SANITY CHECK: after building, run hello_xr (see instructions in the repo) to make sure OpenXR is working properly on your machine. Make sure to run it passing -g D3D11 as arguments (always - we want to be using DirectX 11).

Make sure you’re in the branch ue4-compatibility! Compile based on the instructions in the repo. Once it is compiled, continue to “Operation”.

Understand that this part requires creating a new folder and copying select parts of the compiled extension, as well as the loader from the previous steps and other components. FreeImage may also need to live in that folder. Here’s what that folder can look like: 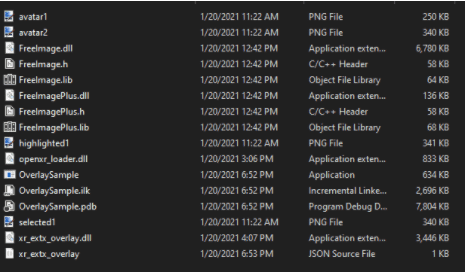 SANITY CHECK: run hello_xr again - it’s still your original layer. Now, run OverLaySample.exe from the folder you created. Do you see a transparent screenshot of Pluto over the hello xr scene? Great, means the layer is working.

To point to the location of xr_extx_overlay.json on your machine. You’ll probably have to create a file to import with RegEdit - see path and reference: 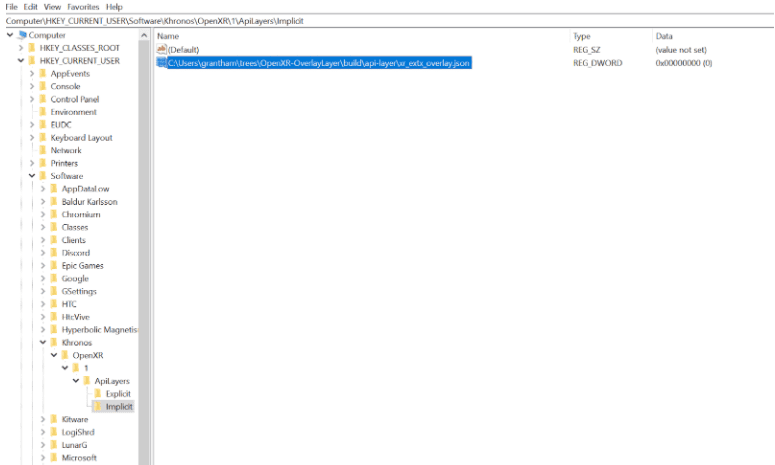 when working in Unreal, disable relevant global vars and the implicit layer registry entry! You can do the latter by renaming the folder, i.e

Check out commit 82f6072f234af8dba9586b3818c2472a2d9bd0cf then apply (git apply) this .diff file. Build Unreal per the instructions in the repo. This will probably take a while. Try opening the Overlay project when you’re done. (Run Unreal through VS to get better logging for crashes, etc. See how to do that in step 7 here).